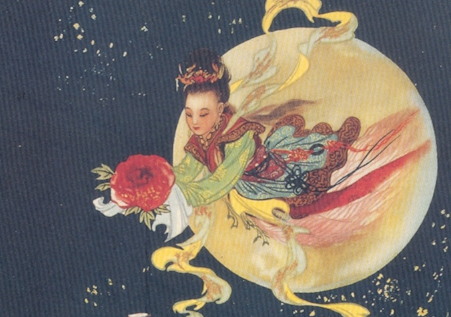 Chang’e is a god, but one to be pitied. For millennia, no one has begged anything of her, for no one envies her. Though she receives offerings, they are a kind of cruelty, a cruelty of kindness: look, girl on the moon, to you we raise wine you cannot raise, for you we share cakes you cannot share. In our poems, we curse her for reminding us of our own terrible aloneness, for the play of moonlight on the empty halves of our beds. We commiserate with her, companion-in-exile, as our boat rides on dark waters and a beloved, lanterned figure on the shore remains only a pinprick of light until it too disappears. Above all, we pity her, smug as we struggle in the miseries of the earth, because all its heat and dust are preferable to the cool silence of the lunar palace.

But Chang’e, too, had known dust. In one past, she was a virtuous wife who swallowed her husband’s elixir of immortality to protect it against a thief. In another, she steals it herself. In still another, she began with immortality, a goddess who married a mortal only to rob him of that which she already held. In truth, the differences do not matter. It is enough to know that once she was married. She had known companionship. She had lived among people. Why else would her story be a tragedy, but for the sake of what she has left behind? Why name the moon lacking if it had not once been full? So her story, for all its variations, always ends when she rises, weightless, to the moon.

Here a disconnect: why the moon? She did not drink the elixir of exile. She flies regardless. Of all the gods, only Chang’e is banished to solitude as a condition of her immortality. Gods much worse than her still roam the earth and walk the heavens, as do gods more virtuous. Then again, Chang’e is hardly a god. She holds no power over the moon; she is merely stranded there. She is god over nothing, not even her name.

When she was first spoken into existence, she was not called Chang’e, but Heng’e, until an emperor named with the same Heng— meaning eternity— insulated that word from all outside himself. As he had decreed, so she was robbed, for what are gods but smoke from the mouths of commoners? Composed from the breath of a poet, dissolved from the word of a king, made and remade by mortals who have never trod the mirror deserts of the moon. Thus the Son of Heaven sealed his eternal self distinct from the world. As for the rest of us, we spoke her powerless. We spoke her trapped. We spoke ourselves unto her: god of nothing but mere existence.

To exist, after all, is to be alone. Sealed and concealed our consciousnesses, in our bodies, trying to touch and be touched by carefully constructing air into sound. Look to your beloved. What do you know of his mother’s smile? His first skinned knee? His trembling mind at the sight of the lake shining with morning light? How can you know him? How can he know you? You will spend your life carefully constructing air into sound and you will not know. It will have to be enough— and it is enough, it is— to have the warmth of companionship, but to never see its light.

Fitting, then, is it not, that we have condemned Chang’e to solitude? If to exist is to be alone, then to exist forever is to be alone forever. But it need not be a tragedy.

Our greatest arrogance: as we raised our faces to the moon, we expected that Chang’e, too, bent her sight towards the earth. But I imagine a Chang’e who turns her gaze, instead, to the stars. She sees rivers of light fall, she sees clouds of dust bloom, she sees the eye of a sun that takes ten million years to flutter shut. In her solitude she finds the movement of the universe in her, and in her stillness she loses herself to the cosmos. As a comet passes, she lets it fall into her eyes, and in return, she gives it the tilt of her husband’s eyes, the tilt of her smile. Not an envelope of thought to be sealed close or pried open, but a flow of perception, continuous, eternal. How can Chang’e be lonely when she is all the universe? How can Chang’e be lonely when she has no self to be alone?

Chang’e, Chang’e— I covet you, I envy you, I beg something of you. I beg for you to lend me some of your clarity, for a face bared so unreservedly outwards that the film of consciousness slips, for eyes to be so filled with stars that I lose them altogether.

Q. Y. Tie was raised and educated in the southwest of China and currently studies English at Kenyon College.