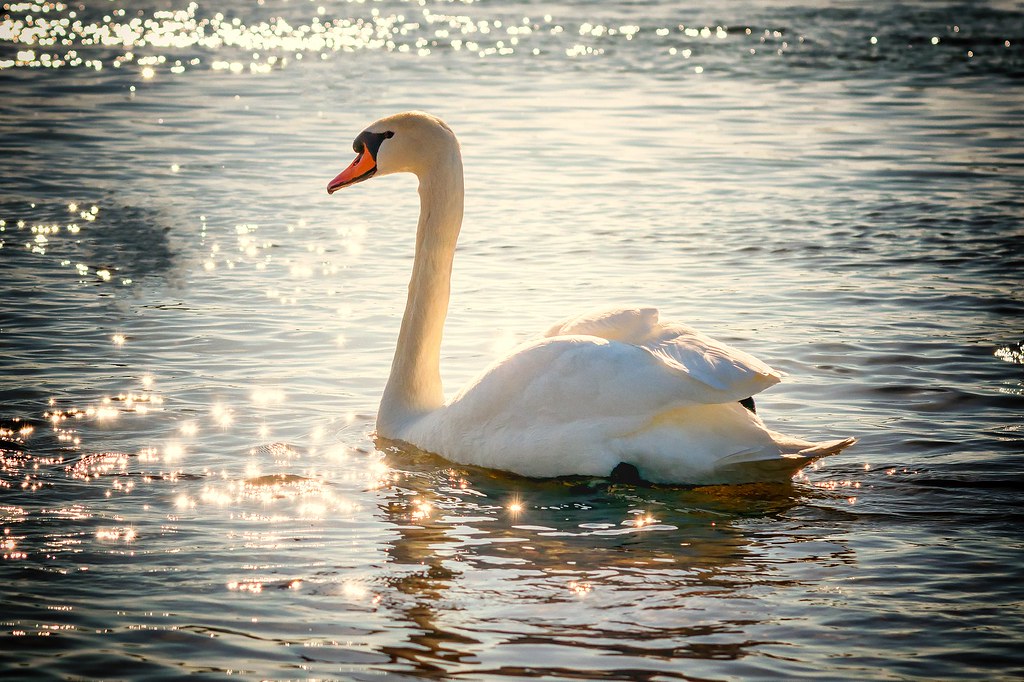 There are six swans in the backyard. They stay so close to the house that I can make out the jagged parts of their beaks when they aim for insects in the shallow, man-made pond. I can make out the unfeathered patch of skin between eyes and bill. They wear their faces like they aren’t afraid of the bareness. They have huge, heavy bodies. When they take off into the sky, wings skimming the surface of water and a thin spread of algae, it’s like the air vibrates, sound waves colliding gas molecules so that, even from behind a window, I hear a swooping gust followed by silence.

I like to watch the swans from the kitchen while I work. The kitchen protrudes from the house, surrounded by glass windows. I like all the natural light and heat it lets in. The heater broke years ago and I never bothered to get it fixed. I settle into my morning rhythm: rapid clicks of an igniting gas stove, the screeching of a water kettle, the furious bubbling of soybeans boiling in water. I warm my hands with a bowl of hot soy milk, stirred with salt and topped with sesame oil. The swans preen as I let the steam warm my nose.

I watch them the same way I scroll through Instagram photos of pretty girls posed in gardens or reading books or holding a forkful of steak, faces tilted to the camera so you can see the line of their noses, backgrounds slightly blurred, a staged natural beauty. When I still swam in high school, my carpool friend and teammate, Angie, told me these girls were thigh gap girls.

“How can you tell?” I had asked. You couldn’t always see the girl’s legs in the photos, especially when they wore those Maxi skirts you could get for twenty dollars on Amazon.

“I just can,” Angie had said. We had broad, muscular shoulders and thighs that definitely touched—trusty limbs to propel us forward underwater. But not strong enough to kick off a body. A body draped over you like a lead blanket. Maybe it’s not a matter of strength but a matter of shock, that anyone would want a non-thigh gap girl. A stringy and stretchy and putty girl who has to look away to avoid catching sight of her drumstick legs. A girl who spreads them so they won’t touch, and anything that comes after is what it is.

I don’t sleep too well these days, maybe because I don’t exercise that often anymore. The more time that passes between my last swim and now, the less I want to see how much my lungs have atrophied, the less I want to step in a swimsuit and offer my body to the water. The transition happens really quickly—from feeling like you could swim forever to feeling like you’re drowning with every stroke, every flutter.

Normally, I’ll just stay in bed, staring at my phone, reading the news, trying to feel worldly and cultured, even though news just feels like toxic gossip to me. Some people feed off that kind of thing: bad news that makes you forget about personal shortcomings. Which is fine, I guess, if it makes me fall asleep. Although not tonight, so I get out of bed and walk to the kitchen to pour myself some hot water.

I turn on the lights to the backyard.

Instead of six swans preening outside, there are six men: all limbs and no feathers, except for one. One of them still has a white wing in place of an arm, like a botched chimera experiment. I wonder if that means his mind is still partly swan too—if he thinks he can still fly with that huge body. The type of body you can only lug around on land. The type of body meant to weigh others down, trap them between sweat and ground, the sky a fantasy.

I lift open a window. It squeaks against the rubber seals. The men turn their heads toward the window. I can tell they’re shivering under the dim lighting and dimmer moon.

Will you give us some clothing? One of them asks.

Will you sew us some shirts? Another asks.

I don’t know how to sew. I hardly know how to fix loose buttons on coats. That’s why I stick with zippers and hoodies. I rub my eyes. I wonder if they have thigh gaps. They murmur among themselves as I glance at their surroundings, trying to spot traces of feathers floating on the pond. A breeze sweeps through the window into the kitchen. Even though the heater is dead, it’s still far colder outside. The cold cuts into my skin. I feel like I’m being filleted, but I know bone is hard to cut. That’s why so many homicide cases are of husbands who abandon their wives’ bodies in rivers instead of chopping them up in suitcases.

I shut the window and return to my bedroom. I wonder if they think they’ve been abandoned.

The following morning, the swans aren’t there. I am fairly certain they’ll come back. This has happened before: they disappear for a day or two but return eventually, the full gaggle drifting in the pond, poking for food that comes from who-knows-where. After all, I can’t expect them to live their entire lives in the backyard. A week passes. I still wake to an empty pond, now completely covered by algae and cyanobacteria. I take a breath.

Lucy Zhang writes, codes, and watches anime. She is an editor for Heavy Feather Review and assistant fiction editor for Pithead Chapel. Find her at https://kowaretasekai.wordpress.com/.