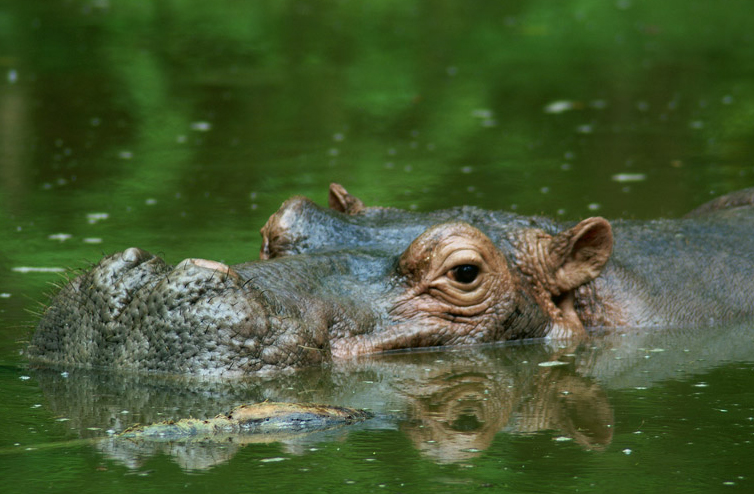 Photo by Patrick Gijsbers via Wikimedia

Like all hippos Pablo Escobar’s hippos submerge and walk on river bottoms. You’ve seen the National Geographic photos, the Nova videos. Like all hippos everywhere, they shit to decrease body weight. They do not intend to poison the blue-eyed plecostomus. Or any other thing. Living or dead.

They must emerge from the bottom. Otherwise, they will drown. They do not want to drown. They want to ascend.

Pablo Escobar’s hippos shit in the Magdalena River to mark their territory. This is natural hippo behavior. They will also shit in a meadow or forest where they sleep, but that is not territory they are claiming. You can have the shit-covered field. They will not fight you for it.

Aquatic territory is the only territory a hippo wants.

Pablo Escobar’s hippos have never experienced a natural habitat, a river in Africa. Zoo-bred, transformed into illegal cargo, El Viejo—as the locals call him—and two accompanying cows (unidentified), were shipped to Colombia to entertain Pablo Escobar at the Hacienda Nápoles. When Colombian forces killed Escobar, the government did not preserve or maintain the Hacienda but let it rot instead. The house, broken into and destroyed by those in search of money, weapons and drugs, fell apart. Forces of nature occupied the grounds. Untended the Hacienda returned to the wild. Electric fencing no longer fed electricity died and failed to contain the hippos. The hippos, like the Colombians, were free of Pablo Escobar. Some humans were ambivalent about their freedom.

Not so the hippos.

They began to roam, move downstream, claim more and more of the Magdalena River. The blue-eyed plecostomus—along with everything else dependent on the Magdalena River Basin, which is to say all of Colombia—have to eat their shit. Or die.

Many humans were once addicted to Pablo Escobar’s shit. Those who were not, joined forces and killed Pablo Escobar.

There is a cycle here.

Already near extinction the Magdalena tinamou flip out when the hippos taint their water, smash their nests, rut new paths to the river, changing the course of the Magdalena River, changing the course of the ancient species’ lives. Their quavering mournful song so rarely heard changes its tune. We quit, they trill. The hell with it, they sing. In an avian suicide frenzy (noticed by few), the Magdalena tinamou destroy the nests they built among the rocks to protect their lavender eggs suffused with pink light. Shells break, chalaza rips from vitellus, albumen leaks, allantoic fluid seeps into the earth, the last embryos fertilize maypop, gulapa and orchid.

The marmalade bush joins the cause. Refuses to issue scent known to excite Pablo Escobar’s hippos (not El Viejo; he needs no stimulant). The little randy bulls, become fertile at age three instead of nine like their African cousins. It is perhaps less due to the environment of the Magdalena River paradise than it is an instinct for survival. El Viejo kills them every chance he gets. All cows his. The fecund females do their part to increase the hippo bloat, giving birth twice a year instead of every two.

Pablo Escobar’s hippos incite disgust and fear in many. But they are much loved by the children of the Antioquia region, home to Hacienda Nápoles. They rise in the dark, well before dawn gives notice, to watch the feral hippos emerge from the lush forests where they sleep.

La luna, one little girl cries. Las lunas, las lunas, neighboring boys and girls echo her song as one hippo follows another. From a distance the children watch the glistening moons lumber toward the river.

A hippo is not a moon.

The moon does not move horizontally along the surface of the earth.

The moon does not dwell in a forest or shit in a river.

No one corrects the children. This is how stories are made.

The little girl’s brother wants a pet, any pet. A monkey. He would be satisfied with an iguana. But their father brings him a baby hippo, a calf that he takes from the woods near the river where he has been hunting Magdalena River turtles (endangered, but a man has to feed his family). He sees a young calf wandering alone. Un huérfano, he thinks and takes the orphan home to his son who washes the baby from water in a bucket at the side of the house. The boy discovers that when he lathers its skin, the hippo emits a slick, slimy substance. He invites other children to play in the slime of his hippo. Every day they wash and smear, wash and smear, coating one another in layers of moon.

Farther down the Magdalena River Basin where the river spills into the Caribbean Sea, caiman gather. Thought to be endangered, the caiman had merely dispersed, dividing their congregations to outwit poachers who desired them as material for boots, belts and bags. But tired of eating hippo shit, they congregate once again. They need a plan. They hope to enjoin the jaguar in their action, but the jaguar journeys across so much territory and its numbers so recently reduced that they have not been able to find one.

Will no one speak for the hippo? asks the dugong dugon. It’s simply a matter of fairness, they think. Their own lives endangered, the dugong have some feeling for those slated for extinction. They are also confused about exactly what a Pablo Escobar hippo is. Inhabiting Caribbean waters, they are, for now, somewhat removed from the Magdalena’s shitty waters. And, according to rumor, the hippos bear some resemblance to them. Perhaps they are distant kin? And so they ask, What about the flying elephants of Macando? They’ve done wonders for Colombia, after all. Maybe the hippo, too, belongs. Could belong.

Stifle your dugong gong, barks the black caiman, endangered but in charge.

They might be tasty. A skittish green iguana imagines one big fat hippo making many more bowls of soup than several iguanas.

The caiman makes a slow turn in the direction of the iguana and expounds on its future. The hippo offers no distraction from your tasty carcass. Your eggs are an indigenous treat for the nonindigenous to gorge on at Easter. Humans will forever rip open your bellies and pluck the eggs for Holy Art Thou. Indigenous treat. Holy rite. You are doomed.

Doom is the mood as they float various plans to take the hippos out.

The Magdalena River appreciates their effort. But she knows who her real enemy is. And it is not, ultimately, Pablo Escobar’s hippos.

It is not the fools who now seek Escobar kitsch and pleasure at Hacienda Nápoles, death source of their ancestors, weekend adventurers riding horseback across cartel lands, once populated by the drug lord and his armies, fools who pay large sums to swim in the once-again-filled pool, sunbathing in illusory scenes of risk and danger.

It is the children.

Those who grew up swathed in slimy celestial cloaks made from the ritual cleansing. Those children with heads full of joyful memories. Baby hippos. What could be cuter? La luna. What is more beautiful than a moon falling into a river?

El Viejo has faith in the children who will protect what they love.

El Viejo will rise again and again and forever amen from the shit-plugged bottom of the Magdalena River.

Jane Hammons taught writing at UC Berkeley for thirty years before moving to Texas. She is the recipient of a Derringer Award for flash fiction from the Short Fiction Mystery Society. Her writing appears in several anthologies, including Hint Fiction (W. W. Norton) and The Maternal is Political (Seal Press) and has been published in many journals and magazines.