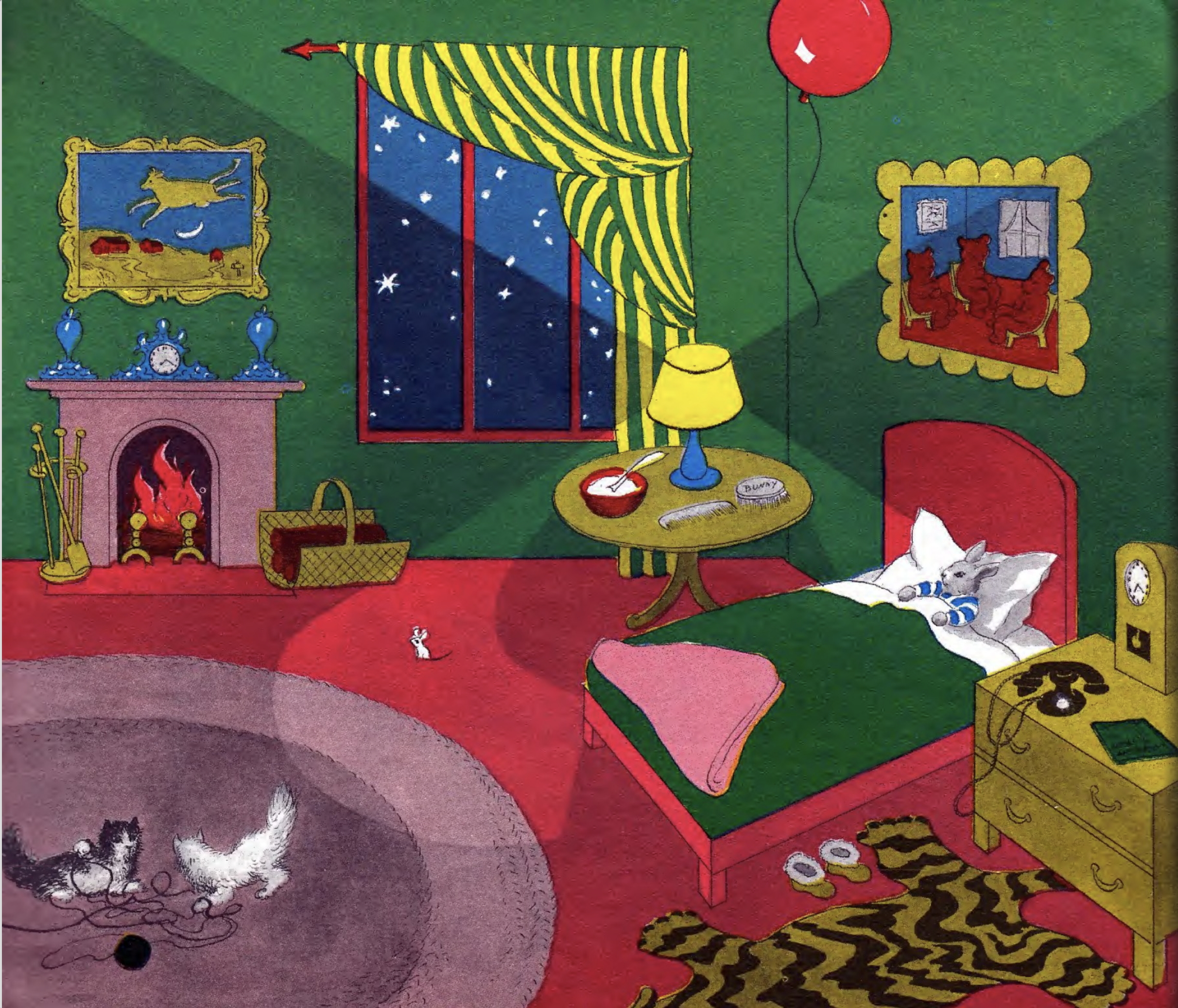 “There’s a bit of an animist bent—everything has a spirit—but the expected ‘Paranormal Activity’ plot never develops. He says goodnight to everything, but nothing says goodnight back. Could be improved if something replied. Would be perfect if something ate him.”
~ Michael Y. Zions, one-star Amazon review of Goodnight Moon.

ONE: The Animist Bent

I watch the carpet bleed red. I think about my grandson and the endless nights and evenings we’ve spent here. I think about the red dollhouse, which I can reach out and touch, and which lights up each time the room gets dark. It took me a long time to notice that it bleeds into the carpet too.

I’m not sure if the carpet is a carpet. It might be something living. Sometimes I can feel it shifting beneath my feet. The mouse, who lives closest to the carpet, says that what I feel beneath us is a colony of ants. I think he wants to believe in something smaller than himself. Every hair on my body believes in something bigger.

I spend my time watching my grandson: the little bunny. He is always sleeping or getting ready to sleep. I’m always awake. I guard against The Room and the paintings on the walls. I watch the painting of three bears in the chairs which hangs over the little bunny’s bed and the one of the cow jumping over the moon. The cow faces away from us. He is frozen trying to move deeper into the painted blue sky.

He says goodnight to the paintings on the wall. When he gets to the bears, he turns around and looks up at them. I watch them cross their arms tighter than before. They shift a little in their chairs. Some parts of The Room like my grandson less than others because some parts of The Room don’t want to be alive. Other parts, like myself, don’t want to be trapped here.

The little bunny says goodnight to Nobody, and the room gets darker. Even the growing moon can’t compete with Nobody. In the dark, The Room feels smaller. When the little bunny sleeps, I watch him breathe and I know that we are real.

I can hear buzzing. A low hum is coming from the dollhouse. The little red house vibrates and the lights flicker. The mouse watches with me as the tiny front door opens and a line of ants stream into The Room. The ants march with determination into the center of The Room, to the round rug. The ants walk first around the edge of the rug and then spiral inwards. We do nothing but watch. The mouse must be proud of what’s happening. He gives me a little nod as if to say yes, this is how it’s supposed to be. I don’t know how it’s supposed to be, but I didn’t imagine ants. When the ants have made it to the center of the rug they stop moving. There are just enough ants to fill the rug. The dark room now has a black center.

“We are the ants that live in the red house.” The ants all speak at once. Their voice buzzes. “We believe in something bigger and we’d like to wait for it here.”

“Did you come from beneath the carpet?” My voice is hoarse from silence.

“Yes, and inside the walls, and the furniture.”

THREE: Could be improved if something replied

Now the mouse is smug. He used to hide near the floor or against the walls. Now he sits boldly on the little bunny’s bed above the fireplace. He seems to be surveying the ants as if to say yes, everything is going exactly as planned. Now I must guard against the ants. I don’t have time to watch the paintings anymore.

The ants march in their spiral, expanding and contracting their lines as evening turns to night and back to evening. When the bunny is awake, the ants widen their spiral and spread out into the red bleeding carpet. But I’m watching them, and they know not to move any further. If they do, I will eat them.

Bedtime is a longer process now. The little bunny has more to do. He gets distracted while he’s saying goodnight. The ants move inward, and he forgets to say goodnight to the paintings. The bears slump down in their chairs. The cow’s eyes grow dull. Once he appeared to be jumping over the moon but now it seems like he’s going to slam right into it.

The little bunny does not forget the ants. He says goodnight to every ant, one at a time.

But he forgets to say goodnight to Nobody, and so the moon grows larger. The moon is so large now that I believe if I went to the window and reached my paw out, I could touch it.

FOUR: Would be perfect if something ate him

The Room grows dark again and the ants expand outward instead of contracting. The outer line of ants step off the rug and onto the carpet. They form a straight line. I’m ready to do whatever I can to protect the little bunny, but they aren’t moving towards the little bunny’s bed. They are marching to the window. The little mouse is asleep on the mantel and I’m alone to witness it.

The ants crawl up the wall and onto the windowsill. One-by-one they march through the window and onto the moon. The moon is so bright now that the green and red room is blue in its glow. The ants are blue-black and then black again as they leave the room. Soon they’re all marching on the moon. In The Room, in the middle of the carpet, where the thickest clump of ants once crawled, sits a black box. The box emits a low hum.

I find that I can stand up, and for the first time, I do. I walk over to the box and open it. Inside is a note. It says:

To the little old lady,

We’ve eaten through The Room and broken the spell you’ve been trapped under. Take your grandson and follow us. If you don’t, you will be eaten by The Room itself.

I pick up the little bunny and hold his sleeping body close to my heart. He smells like mildew, but his fur is soft. I stand with him at the window and watch the moon.

The ants march along the blue-grey dirt. They gather dust on their feet and antennae. They buzz with excitement.

Madilyne Igleheart is a writer from the midwest. She loves movies, mushrooms, and her two ferrets.