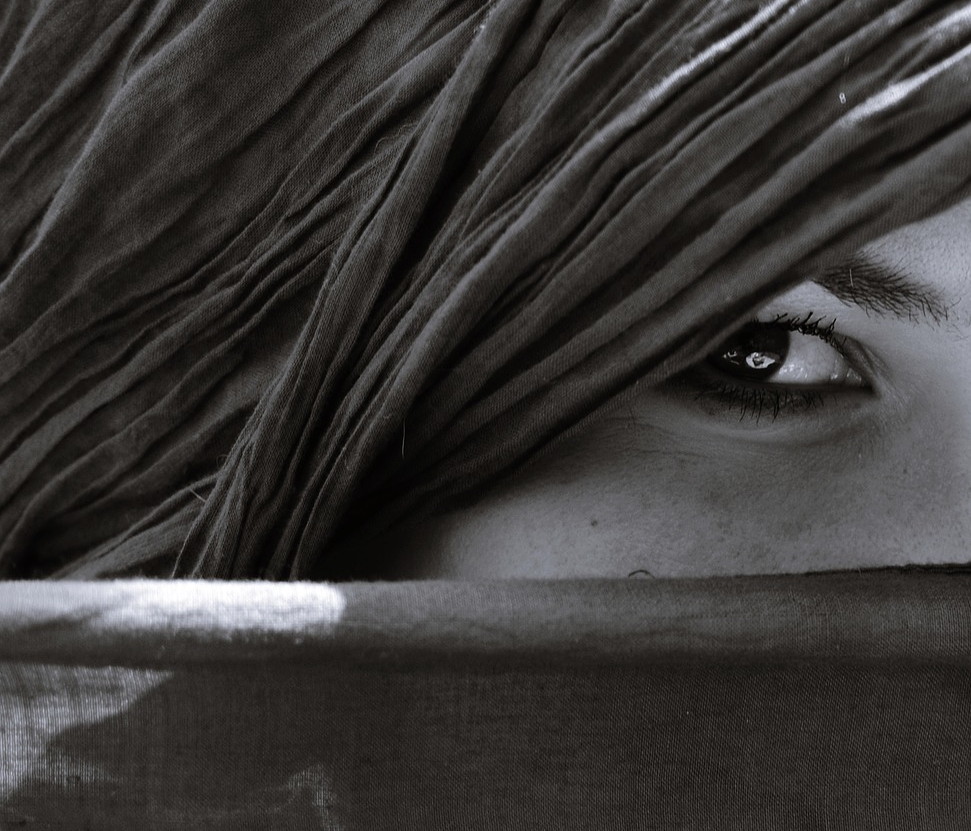 I have made my home in the crook of an elbow in a heterosexuals-only club. My forearm is Allah, my bicep is God.

Home is a place where, on a cozy quiet Sunday morning in which the world seems to be at peace with my life, I might find myself doubling up my spleen against the cold curled lip of the bathroom sink, lamenting the fact that my spine is not a collapsible bicycle, with phrases like corrective rape, village retribution; thirty years’ prison time fluttering across my mind’s eye.

This particular Sunday the air is hot, tepid, nonplussed by the frantic whir of the ceiling fan the man downstairs installed for her last January, ostensibly to be chivalrous. He’s really nice, she says, and I can’t disagree. I can, however, believe that this nicety is the kissing cousin of a reason to put his feet on her bed, to imagine the weight of it below her below him.

I awake facing the monument of faith that’s sitting pretty, prostrate on her back between her freckled shoulder blades. It slid round her neck on its chain in the sweat she broke for me. She took the cross out of retirement the first frantic morning after the first night in which she imagined not touching my hair, or complimenting my jeans but fucking me like a boy.

She says I’m God’s way of testing her. Tells me to behave. Eroticism is a chain link fence collared on all sides by the high and mighty ought.

I’m going to rot in hell, she says. And where do you think you’ll go when you die?

She laughs for a long time. No really she says.

No really I said. I want somebody to FedEx my brain to NASA so I can hitch a ride to the stars. I believe in science the way you believe in God.

They’re not incompatible, she says.

Maybe so, I concede, but string theory doesn’t give a rat’s ass if I’m gay.

The night prior, we had paid off the taxi driver.

He had seen enough to know Allah would insist on our dispensation. She was adamant, he was angry. The argument was settled when she pulled the paying customer card. I took solace in this, and went to bed believing I was no longer afraid.

At 9:01 AM the rapture came for us. Fast raps on the flimsy door with a cheap lock, rhythmic and violent like semi-automatic shots. We two: rocked by the knowledge of our status as specimens in a petri dish.

Believing in the strength of our illusion is the closest we will come to freedom.

Here people are paid to look through windows at night, are given a sack of rice or a bottle of milk for peeling back the sheets in the middle of someone else’s intimate moment. There are places in the world where you are not entitled to your privacy, to your love.

Those places still exist in the world, and this is one of them.

The man’s whistle is soft, subtle; jovial even, incongruous with the panic come to rip the lid off an otherwise predictable morning. The song on his lips stitches us naked, sideways to the sheets, matter clasped in terror, beholden to the treachery of our bodies.

She gives me a look like the sharp arc of a scythe teasing the topside of my belly button, drug up and flayed, like a fish. Bathroom, she hisses.

I want to believe that sleeping in on the morning of arrest is a courtesy afforded the condemned in scenarios where “trouble” can be washed away for the price a cold Fanta, a new pen; school books for the arresting officer’s children.

But we both know that is not what this is.

She gathers her robe and makes for the door. I: transported to a planet two times the mass of earth, in awe of her apparent calm. Nothing works the way it should. My bare feet: baby elephants in steel-toed combat boots, my bare body a random, unmanageable collection of cells.

I and my phantom limbs pressed ourselves paper-thin against the shower wall, wedged between God and Allah. In haste I work to replace the skin-tight dress whose dizzying edges she had receded again, again.

I am wearing neither underwear nor a bra, just the aching understanding that it could all be over for us here, now, on a rainy Sunday morning with puddles gathered on the patio, a glass of untouched wine on the floor, the bedroom stale with the smell of sex.

I understand in that moment about the redemptive power of religion, because instead of praying I am thinking about how I am going to end up on the news like that kid from one of the Carolinas who went to the wrong Korea and jacked a hotel sign.

The Twitter headline for this moment in my life will read as follows: yet another American fails to abide rules of a foreign body-politic on their soil; shows abject disregard for the implications of cultural relativism. A philosopher, no less!

It occurs to me that I don’t have a President I can call. I wonder about how I would reach Human Rights Watch if push came to shove; wonder about the condition of the prisons, what they do to the gays here, the status of Americans.

On my side of the house, I’m riding out a hurricane in a duck blind. I hear her advance a final line to the guy who had installed the fan, who’s come upstairs to her apartment this morning to sit on her bed and brush the backside of his hand on her arm. To speak to her in urgent tones, ultimately, about nothing in particular.

It’s Sunday, Mohammad, she says. It’s God’s day, and I am resting.

From where I sit I cannot see her expressions, but I can imagine that she pulls her robe tighter around her, offers him a Princess Diana quarter revolution and her megawatt grin, unblinking in the harsh morning light.

She waits a few moments, and I hear the sure-footed pads of her feet reentering the bedroom, gently closing the door with insistent normalcy.

She comes to pull me out. I have the taste of fear in my mouth, a bush-eyed insistence of certain death close behind.  I find my spine and amass the muscles taut around it, close the loops on the circuit board to my limbs, my heart, my pattern of respiration.

She’s giggling at me. Says, what, did you think the whole village would be waiting for us downstairs with torches and pangas, courtesy of Idrissa?

I don’t have the heart to tell her I did.

I moved here knowing that thieves—mwizis—are subject to village retribution to the tune of the taking of hands, fingers, goats, first-born children.

What would they take from me if they knew I am mwizi of this most esteemed woman’s time affections, who, if it weren’t for me, might otherwise have gone forth and multiplied generous, Godly men?

What would they take from me that’s not already been taken?