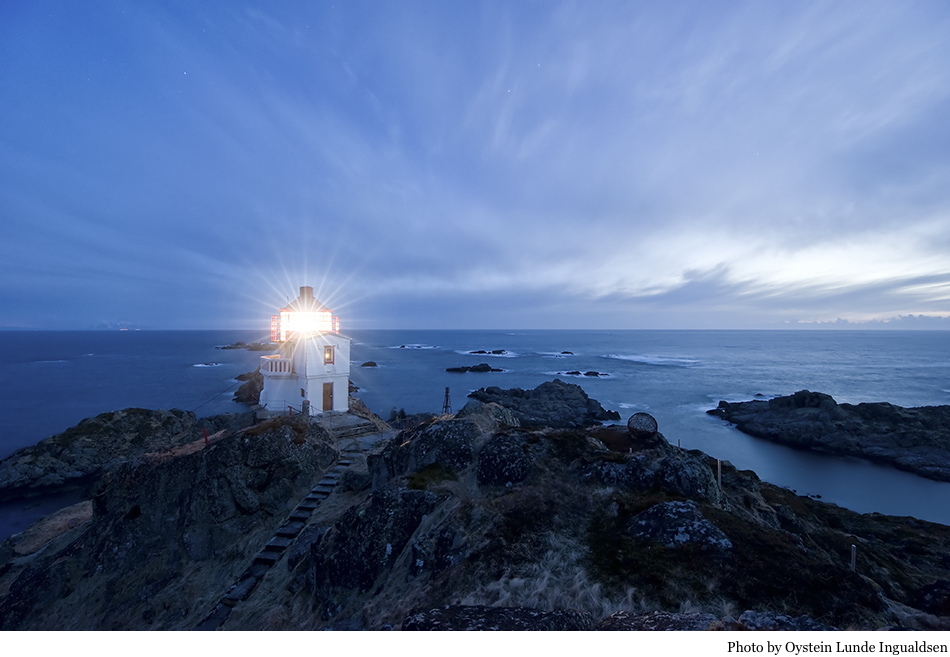 Three times the announcements change their language before I step off the train to sleep in Lars’ apartment. I have been here once before in summer with crowds along the quay. Winter now; red berries. At dusk more crows than trees.

Carriage 15. Seat 55. Occasional bursts of sun. That peculiar Swedish gothic. Red wood houses, lakes and forest. My companions: three friends going to Abisko, a psychologist from Lund – and me.

I’m going north, to work on a lighthouse.

A lighthouse? How far north?

Sun rays scatter across the page. The sky is lavender. The window becomes a mirror of the carriage we’re in. I remember Kvikkjok. I was lean and mute. The few words left were a kind of birch-lash against the skin. I walk over the surface of myself; I am deep in snow.

I can feel the blast of ocean coming through that buck tooth gap. The needle twitches. Beneath the peaks, a school. Beneath the school, a cemetery. Passing through the eye, then freewheeling down to widescreen ocean. Crouched in the water is Gaukværøy. Behind Gaukværøy, Litløy.

I see him coming from the quay; cap awry, loping stride; grinning. This is Mark. He brings me to the boat.

Wind picks up. Speed and blur of water. The line of Lofoten rises from the ocean. The eye is drawn to it – pristine archipelago – the spine, serrated into peak and trough. Perfect, reckless, steep.

The engine cuts. We float to the pier of Litløy in silence. Then, shouting. This is Jean; a jig-saw puzzle of pop-eye muscle and sound. Two-hundred and twenty steps from the boathouse to the lighthouse. By its side, the lighthouse keeper’s house where Catharina greets us. Germanic. Grimm. We sit to a welcome meal. The room is airborne. The eye keeps flitting across the sound to the line of Lofoten. Exile opens up.

Mole-grip, spanner, Stanley knife. I shear the heads off bolts. Learning slowly when to ratchet clockwise, counter just a little, when to loosen dirt. The door below is jammed with an old rug; it has no handle. A rusting stair leads to a wood-panelled room somehow like a submarine; another ladder to the upper wheel.

Hex screws, imperial size. Sand-paper, spirit level. The lighthouse has a gantry looking out to Arctic ocean. Balanced high, switching; a hammer for a drill. Shouldering the angle-grinder ‘til a bolt swivels off like a Sufi dancer, into imaginary air.

We’re dismantling the panels and nerves that frame the eye. Inside, the trellis floor sags like a trampoline. Dust sieves down to the room below. Glasses, goggles, grimed. Gunge and sealant stripped; wrench and hammer prise an arc of concave steel; we work the convex side ‘til the glass breathes wider than the frame it’s been wombed in for a half-century and more.

The work goes on ‘til Mark knocks off at four. I linger – letting everything infuse and seep.

The door slams. Really, who gets locked in a tower! I look around. I could squeeze through that flue, but the drop’s too deep. Then it comes to me – I grip the hex-stub of the handle with the mole-grip; clamp it tight. The prosthetic hand turns the latch-bolt. The door opens to a blast of light. I am fixed to the photograph that brought me here; oxidized.

Rain this morning, so we skip the tower in favour of easy work – sorting wool in the upstairs room of the main house. Jean can’t do anything without music so the little blue-tooth box is at our feet. We sit on the wooden floor; sifting wool that’s destined to insulate the tower.

Viking sheep, adapted to winter, gangrenous forepaw and all – fleece matted with peat and everywhere they’ve been. The sorting is too easy for Jean – he needs to use his muscles, to tire himself out. Greasy oil smears our fingers; just like unwashed human hair – it could be pressed out of the fleece like olive oil; a grease to keep cogs moving.

The blue-frame loom for instance, that no one knows how to use. It is beside us. Parallel wires like an old main-frame zither, with pedals and catches that should be played to a folk- clop. But it is Junip that plays on the blue-tooth box; electro-folk from Sweden.

The sifted wool is stuffed into bags, ready for a final wash. Dried earth is siphoned off along with shit and twigs and gorse. Bog asphodel – “bone breaker” in Latin. They believed it to be the cause of the sheep’s brittle bones. But it’s the thin soil, lacking phosphorous, that’s at fault, not the asphodel.

The sails of Viking ships were made from yarn whose colours include shades of grey known as blue; shades of brown known as red.

Everything in Jean’s demeanor is disappointed with sitting about on the floor, with these sacks of wool about us as though a museum had offloaded the worst of the 20th century for inspection. Even if it is warm in here and wet outside – it is still useless, as close to office work as we’ll get.

Jean is a gaucho at heart; godson of Hephaestus, beloved of blacksmiths and carpenters. Knife wielding, oyster pirate, surfer of the Arctic sea – he is not best pleased to be wasting time on something as light as wool. Metallurgy and fire are more his thing.

Heft is important too; not for arrogance or the dead-weight masculinity of mirror lifting – but simply for the teleology of hands, transporting trays of fish, baskets of barbed wire. Deformed, back-breaking labour – rejected and thrown from Olympus; always down to earth. His coat of arms is the sledgehammer, the angle-grinder.

This is why he is obsessed with wild horses and bears. Experiments and explosions are good; wool is bad. Midway through the morning, after tea, he goes back to the danger of the tower.

These excerpts are taken from Laurence O’Dwyer’s forthcoming book, “Poems from Litløy Fyr.”

Laurence O’Dwyer holds a PhD in paradigms of memory formation from Trinity College Dublin. In 2017, he received a fellowship from The MacDowell Colony. He has won the Patrick Kavanagh Award for Poetry and a Hennessy New Irish Writing Award. He is also a visiting scholar at the Scott Polar Research Institute at Cambridge University. He is originally from Tipperary, Ireland.