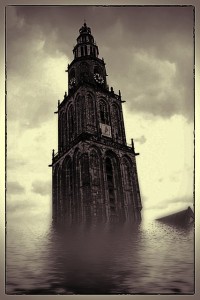 God, I thought after three days when the rain wouldn’t abate. At first I stayed home, for there was no point carrying on hoeing around in that weather. The earth turned into a big mush, and then, when it was too full to suck in any more, pools like tiny lakes formed in the fields. We burned the turf sparingly in the hearth because if it kept that way there’d be nothing dry left.

After a week all the fields around the house glistened as far as the eye could see, rippling with the drops of neverending rain. That’s when I knew we had to go. We started walking east with water up to mid-shin. I carried Thomas, who was too little to wade through, and a bag of spuds. Edith held Lena’s hand, and with her mother’s help our daughter ploughed on, the good girl. I’d managed to bring all the hens with us – they sat half-stunned on the mule’s back, relieved not to be in the water that stretched all around us but not altogether happy with the situation. Edith carried the rooster in a cage.

A couple of hours after starting little waves came to hit our legs. They were coming from the mountains. The high peaks loomed on the horizon, disappearing almost in the black clouds which looked fiercer there. We had to go on, though, to keep on walking. Uncle Will’s was the highest place we knew, and surely if water reached his house there was nowhere safe. What had we done to deserve this? Hadn’t I sacrificed a hen, bled it to the roots of the old oak tree? Prayed to Lugh for a good season, a good crop? Had I offended him? Or had I maybe been talking to the wrong god?

It took days to get to Uncle Will’s house on the hill. We slept perched up in soaked trees. Poor mule had to spend the night in a few inches of water, and after the second night we woke up to find it dead of exhaustion. I fashioned leashes for the hens we couldn’t carry and tied them to my belt. The creatures were lost, wandering this way and that until a step of mine yanked them further up the road one notch. They were as puzzled as we were about the water rushing down.

When we arrived at Uncle Will’s he wasn’t there. He had probably left too, looking for even higher grounds to keep himself dry. Or maybe he’d been gone on an errand and found the water had closed in behind him. His cabin was as far as we’d get, for when we looked down on the valleys below, we realised we were locked in; Uncle Will’s hill had turned into an island. We took whatever comfort we could in the thought that if the water came up to the top, then it was the end of the world, and no higher mountain could change anything.

The water came up. Our supplies were thinning fast, but we tried to live as normally as we could. We had Uncle Will’s goats to milk, but his vegetable patch had long been washed down. One morning as I had come down to the shore to check how much it had risen during the night, I saw a girl clinging on to a floating beam and flapping her feet desperately to reach land. I went in and managed to drag her back. She was a pretty maiden of fifteen, I would say, and as she lay exhausted on the ground her clothes clung tightly to her frail body. If we survived, I thought, our Thomas would need a wife. If we survived. There’d be a whole world to populate. We might even have to start before Thomas came of age.

Then one morning we woke up and when I swung my feet out of bed they landed in water. We took everything we could, bundles of clothes and what little food was left, and we climbed onto the roof. Me, Edith and the kids. The girl kept to her side of the roof, grieving still maybe for her lost family. The hens and goats paced around, sizing up their new plot. So that was it, then. It didn’t look like there’d be a world to repopulate, after all. Only the highest mountains still stuck out of the water on the horizon.

I thought I saw a boat, far out at sea, but I realised I was dreaming it, or turning mad, or else glimpsing at the world beyond when I saw in it beasts with no equals in our drown world: some with long necks like poplar trees, big fat ones like giant pigs with tails on their faces. Others still, and they all paced up and down the deck of that dreamed boat like my goats and hens paced our roof. Whatever the hell it meant, I didn’t tell the others.

They’re all lying down, all the colour washed out of their faces, surrendering to the drench which hasn’t ceased to fall on us for over a month now. The water is inching up the base of the roof at a visible pace. A few hours from now, there’ll be nothing left. Should I wake them up, warn them? What’s the point. There’s a dove here, it must have landed when I wasn’t looking. It nibbles at some mouldy flour left at the bottom of a bowl. Come to share your last moments with us, Brother Dove? But no, as the water reaches my toes it takes off, straight ahead as if it had somewhere to go. Too good to die with us, you would think. Well, good fucking luck.

Armel Dagorn is a 28-year-old Frenchman who has been living in Cork, Ireland for the past seven years. You can find other stories of his at http://armeldagorn.wordpress.com, or just say hi.