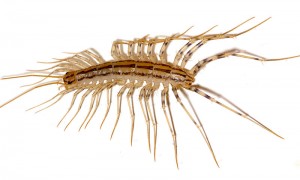 A few weeks ago around midnight, I woke up and turned on the lamp.  My cat, Lilly, was sitting at the foot of the bed studying the ceiling with interest.  Not the hunter’s interest that makes her bottom twitch with excitement, but a kind of friendly curiosity.  I lifted a sleepy gaze and saw, directly above me, making its way across white stucco, an enormous centipede.

I shot out of bed and starting sweating.  Hard.  My fear of certain insects is primitive and can pull a scream out of my belly that seems not my own but a roar ascending from that misty era before Homo sapiens discovered fire.  I managed not to scream.  Instead, I swore.

“Oh shit!  Oh fuck!  How am I going to kill this fucking thing?  Why the hell couldn’t Marc be here,” I keened in a voice Lilly had never heard me use.  Her golden eyes widened with alarm.  She disappeared under the bed.

I got the broom, but at first I could not will my arms to lift it.  I stood in my nightgown and flip-flops, a wild-eyed woman of fifty-four, sopping with sweat.  The centipede, which had stopped in its tracks upon sensing light, was now crawling towards the ceiling fan.  If it reached that fan, I would lose the clean aim I needed to kill it.  With a martial arts shriek, I lunged upward – and missed.  The centipede fell on my bed.  I shrieked more and struck it with the broom’s stiff straw.  Some of the creature’s legs broke off.  I struck again and again.  Finally, it curled up and died.

It was moments before I could bring myself to gather the legs and body into a Kleenex and flush them down the toilet.  After I did, I called Marc, from whom I had recently separated, and told him shakily about my ordeal.  Yet even as I described that terrifying centipede, I was seeing its scattered, broken legs and the way its pitiful worm of a body had shriveled into a ball.  And part of me was appalled by what I had done.

When the Dalai Lama was asked how to instill compassion in children, he replied, “teach them to be kind to insects.”  I think this is wonderful advice.  I agree with the Dali Lama.  But the next time I see a hairy insect in my apartment, I know I am not going to scoop it in a tissue and take it outside.  I am not capable.  I can be kind to ladybugs, dragonflies, moths.  I have plucked worms from sidewalks after rain and placed them on grass.  But I cannot be kind to centipedes.  They terrify me.

It seems humans are no different from any other animal when it comes to fear.  Fear reduced me to a screeching, broom-wielding nutcase.  And fear recently transformed my delightful cat Lilly into a snarling mountain lion when I brought her to the vet.  Lilly was feral before I adopted her from the Humane Society, but you would never know it from her behavior.  When I am home she follows me from room to room and always settles herself near me, whether I’m typing on my laptop or watching TV.  She’s very polite about sheathing her claws when we play together, even when she pounces.  Her meow is high-pitched and sweet.  “What a good friend you are!  I’m so glad I brought you home, Lillybird,” I coo to her as she stretches out in  gold-and-white splendor, belly up, tail thumping in agreement.

It took seconds at Westgate Pet Clinic for my darling to regress to feral.  She paced and growled menacingly in the small examination room.  When the vet’s assistant tried to calm her, Lilly slashed at her with extended claws.  Then she slashed at me.  The doctor had to grab Lilly by the scruff of her neck and ask for help holding her down as he gave her a rabies shot.  All three of us were relieved when she was back in her carrying case.

Fear morphed me and my cat into hulks, but there’s a profound difference in what caused Lilly’s transformation and what caused mine.  An assault of alien smells, dogs barking, and strange humans looming over her no doubt convinced Lilly she was in danger and had to defend herself to the death.  Whereas when I was dismembering the centipede, I knew I was not in mortal danger.  As Marc has often reminded me (and my father before Marc), I am a thousand times bigger than any centipede.  “They’re more afraid of you than you are of them, Frannie.”

I know this; it doesn’t matter.  It is their ugliness that terrifies me.  This admission has discomfitting consequences, and I think no writer grasped this better than Kafka.  A few years ago, I taught The Metamorphosis to a group of undergraduates at a small liberal arts college in St. Paul.  I did not worry about boning up on the latest interpretations of this famous story.  I simply asked my students to take it on face value: a shy, hard working clerk who willingly supports his parents and sister is turned overnight into an enormous insect (probably a cockroach, but Kafka never specifies).  Suppose this happened to a family member of yours, I said.  Suppose you knew, despite its hideous exterior, this giant cockroach was really your brother, the brother who stood up for you at recess and taught you how to drive.  Could you bring yourself to feed and care for the insect?  Could you overcome revulsion and show love?

In The Metamorphosis, the clerk’s sister at first manages to do this.  She brings Gregor carefully chosen remainders of meals and tries to anticipate his needs.  Gregor’s parents cannot bring themselves to enter his room but understand they must swallow fear and disgust as best they can, for he is still their son.  Gradually, attitudes change.  By the story’s end, Gregor is no longer a him to his family but an it.  Starving and painfully infected by an object lodged in his back – an apple hurled at him by his own father – Gregor dies alone in his room, which has been locked and bolted from the outside.

How easily revulsion and terror degrade thou into it.  How inevitably they allow us to decide another living creature, whether human or animal, deserves death.  But when someone is able either by grace or by will to overcome these emotions, the shift in perspective can be miraculous.  This occurs in another famous story, Coleridge’s Rime of the Ancient Mariner.  It is the poem’s most mysterious moment, the linchpin on which the entire work turns.  When this profound shift occurs, it is nighttime, and the mariner is the last man alive on a ship full of corpses.  He has no hope of finding his way home again.  Broken and lost, he notices water-snakes coiling around the rotting ship.  He had initially regarded these slimy things with horror.  But tonight he sees how beautiful their various colors are, how moonlight makes their long bodies shimmer and shake off flakes of light.  Creatures that once repulsed him now fill him with awe for their God-given beauty.  In that moment, the albatross falls from the mariner’s neck.

I will never be able to appreciate any God-given beauty a centipede might possess, but I read about them online to find out if they did any good.  They feed on smaller, pesky insects.  They leave vegetable gardens alone.  They are nocturnal creatures and avoid humans.  They do not crawl up drainpipes (their finest quality, as far as I’m concerned).  Perhaps a centipede’s shape and form is pleasing to someone, somewhere.  St. Francis might have spotted one crawling on a cave wall and felt only the friendly curiosity my cat displayed.  Perhaps I am as revolting to someone, somewhere, as a centipede is to me.

I considered this once in a poem that begins, “Do we frighten angels / with our ugliness? – / we who divide creation between / beautiful and not?”  It’s very possible we do frighten them, we humans with our repulsions and our hatreds, our violent desires and resentments.  Yet if angels exist (and like Elisabeth Kubler-Ross, I believe we walk among them daily) they manage not to destroy us in disgust.  They allow us to believe we are beautiful.

Francine Marie Tolf is the author of Rain, Lilies, Luck, her first full-length collection of poetry, and Joliet Girl, a memoir, both from North Star Press of St. Cloud (2010). Prodigal, her second full length collection of poems, was published by Pinyon Publishing in 2012, and she has a prose chapbook forthcoming from Greenfuse Press in 2013. Read more of Francine’s work at www.francinemarietolf.com.