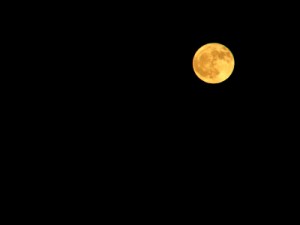 It was very cold. I dreamed of orange groves in Andalusia and small villages during siesta in Almeria. I turned the key in the lock and sat in the chair.

There was a dripping noise, a dripping of water from a tank. I counted then waited, then glanced at the ceiling. I stepped into the next room and held my breath for a moment. Again I counted. I went back into the only room I used now, the library I called it, with a guffaw, and must have fallen asleep because when I woke I had no idea where I was for at least a minute, a full Moon with the glorious yellow eye of a chieftain, a million years of undisputed wisdom at his beck.

A month passed like this, then another. I had little to report except that one day, within a matter of hours in fact, two girls called me Sir, one in the Central Library and one in a garage when I was checking my car in for a service. What could it mean? It must be something sinister. I had my suspicions.

That day the centre of a ceiling in the living room I no longer used collapsed. What’s that? I went to investigate, moving almost with speed. The room was in a shambles, plaster and bits of timber spread over the floor, a heavy cloud of dust meandering towards the window. I stood there inert for some time before pulling the door out and making my way back to the dimly lit library; guffaw.

Another month went by. Thank God, I heard them say. I walked as far as Shandon Steeple and waited for the mad anarchy of bells. I stood on a corner. To my delight I heard a ship’s siren rising up from the docks and strained my ears to hear the creak of the stern, the ship of time cutting through harbour water.

I walked back down the hill to a restaurant with red checked tablecloths. The regular waitress whose name I could not remember stood over me. At first she seemed to be in a very good mood with a big ribbon or a bow in her thick bushy hair. Her nose was out of proportion with the rest of her face, on the side of being too large that is. She wore a very bright lipstick, so thick that it seemed to be always on her mind, the tip of her little tongue popping out to take a lick now and then. You’re turning a bit grey, she said. Lick the lipstick. The slant of light I had chosen to sit in accentuated the condition, I thought. Why hadn’t I chosen my usual dark corner? You should call to me, I’ll give it a rinse for you. Lick the lipstick. So, you’re also a hairdresser, I said? I’m an apprentice, she said. My sister has a business. I’ll be joining her full-time soon, out of this hole. There are worse places, I said. At least it’s clean. Well, I’d like to see you after five hours in here, she said, at which comment I laughed for some reason. In parenthesis let me add that she was not the kind to ever refer to me as Sir.

A bald man with his wife, that is I presumed it was his wife, sat at a table inside the door and at an awkward angle in relation to me from the point of view of eye contact. When I had first chosen the table I had not noticed them. He kept staring at me as if he knew me of old. The light streamed in through a high arched window above the entrance making his bald pate shine. How small and invisible, the woman seemed. The man straightened his back and I sensed his continuing stare in my direction as I addressed two fried eggs and a plate of greasy chips and peas. The eggs floated in oil but were delicious. I washed them down with a coffee. When I got up to pay the waitress-hairdresser was nowhere to be seen. I paid a silent man who emerged from the kitchen when I stood by the till.

Further down the street there was a tattoo shop which also did body piercing according to the colourful sign in the window. I paused for a moment. A young man wearing a baseball cap and heavy green army surplus jacket came out and offered me a cigarette which I declined. He lit up and said that there were days when he wondered why he bothered, know what I mean, there are days and this is one of them?

I walked on. To endure this life like a donkey, to submit like Sancho Panza, how about that as a way out? I get the feeling that he did not admire Don Quixote all that much and what did Horatio really think of Hamlet? I sat on the ledge of a turf accountant’s shop to take a breather. A group of girls came out of a doorway and stood around not paying me the slightest bit of notice. They were foul-mouthed, coarse and even savage, their crudeness as red as the lipstick they were all wearing as if it had come from the same container or whatever you call it. They handed a packet of John Player Blue around. I noticed that one of them had a bright, sparkling diamond like a stud in her nose. It was something I have got used to over the years, searching for harmony only to find that something else latches onto you, the discordant jangling of chaos, perversity nurtured in the cauldron of the real.

I met April on the stairs. She apologised for the noise over the weekend but why hadn’t I joined them? Was I becoming dull like everyone else she asked? If so it was a shame, you have to get out and live. Her feet clattered against the boards of the stairs as she all but fell towards the street, it being before she broke her ankle with a fall on the ice.

I went inside and sat in the old chair. A remarkable flurry of images ran along the wall, a representation of the vagaries of life as observed from a distance; the industry of the makers, the speed at which they moved, their productivity, the all night parties and night clubs, the oceanic gratification of regular sex, then the grinding of the losers, slogging through routine into illness, lost beneath the cancerous rubble of daily life.

I sat there staring at the animated wall for what seemed like hours, half asleep like Sancho Panza who did not want to be Don Quixote, Horatio who outlived Hamlet, just sat there staring at the images, streaming from the crucible. There were vipers, there were rodents, there was an infinity of variations and young women shouting, Sir, Sir, Sir. I knew not why I continued. I knew not why I was so vain no more than a ten year old girl knows why she keeps her diary.