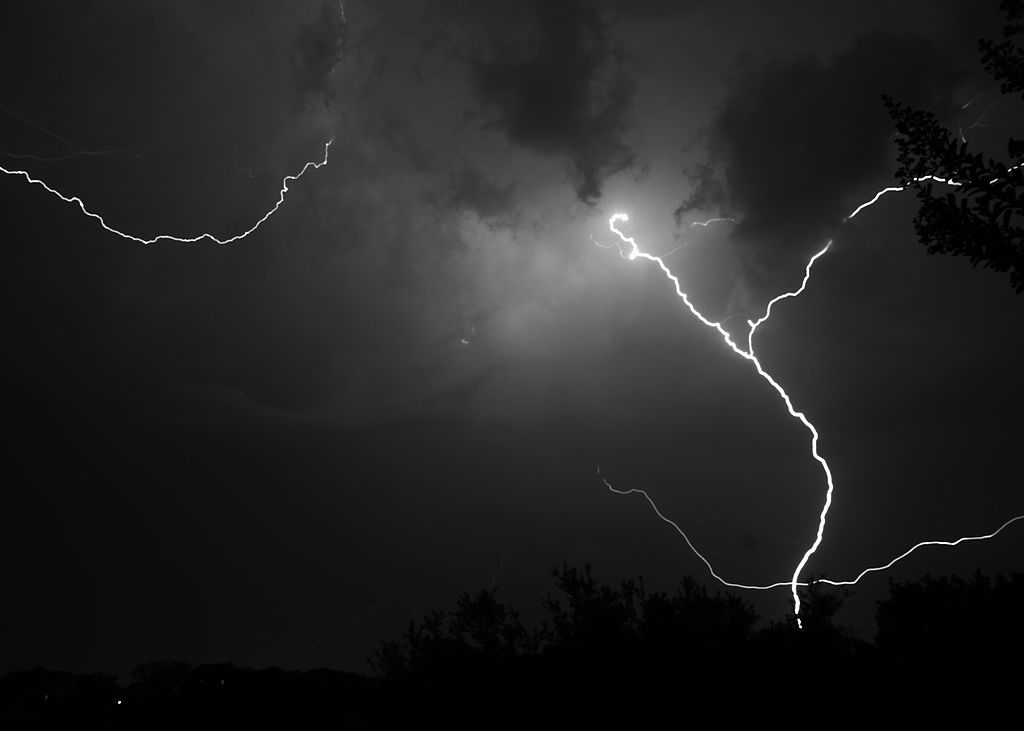 In between the flash and boom of thunder, I count eleven seconds.

Though it’s the middle of the night, we’re both awake, lying face-to-face closer than the four-person tent necessitates.

Between the next flash and boom, I count nine seconds.

Wordlessly we sit up, preparing to move outside. To wake our students, and sliding rain gear over underwear, spread out in the woods away from the water’s edge and tall pines of our campsite. Company policy prescribes how and for how long we shall crouch in our own little turtle shells as rain pounds down and we try not to sleep. Hypnotically we chant the seconds, trying to count the time between flash and boom, distance between storm and us.

We’ve gotten quite good at it. Our universe is small – six students and two instructors on a thirty-day expedition. With the exception of passing courtesies from other travelers on portage trails between lakes, our interactions with other adults fall away, leaving just each other. And yet he says, “Don’t diminish it,” when I theorize about our closeness being related to our closeness.

The storm cloud which now sits squarely above us carries a positive electrical charge in the upper half, and a negative charge in the lower. As the charges increase, the ground begins to carry its own positive charge. The students grumble but comply. Headlamps and unbuttoned jackets and feet in the wrong shoes, they stumble inland, as we direct them to the incrementally-safer thicket behind the campsite.

The risk of being struck by lightning is low, but the consequences are high. Charged with the responsibility of keeping other people’s children alive in the wilderness, we do what we can to manage the risk.

The storm is generating its own electrical field. Time and again the cloud short-circuits – the ionized air becomes super-conductive plasma. Paths form in zigs and zags from the cloud to the ground, and the electrical charge follows the first one to reach the earth. The rapid exchange of energy makes a large amount of heat, causing the air around the current to explode in thunder. The sound is a shockwave, which can be felt when close enough.

Between flash and boom, now crouched at the end of our dispersed line of students, brushy alders drip on my hood which drips down my sternum. I count one one thousand two one thousand.

The world exists for a moment in blue and sharp white. You are crouched at the other end of the line, two hundred feet away, counting one one thousand two. We feel the shockwave pass between us.

Within a mile of us, something has been struck by lightning. Lit up and blown apart. Rain begins to form puddles around my boots. We have to wait until the storm has passed by, ten seconds beyond us, before allowing the students to return to their tents, and returning to ours.

Inside we navigate trying to remove our raingear without getting our sleeping bags wet, limbs colliding as layers fall away into puddles tucked up against the door. Finally, damp, 2:30 in the morning, we collapse back onto our sleeping bags, the rain noisy but harmless now on the rainfly. Our alarms are still set for 4:00. Wind in front of the oncoming storm kept us from making the day’s mileage, but morning brings no ordinary expedition day. We’re scheduled to meet our supervisor at 10:00, with miles of open water between us.

When the alarms go off, yours one minute before mine, we make sure the students are awake. In between their wake-up and the canoes being loaded and ready to depart, an hour passes. We lie in our sleeping bags most of that hour, waiting until the last possible moment to take down our tent and throw our packs into our boat, paddling away right behind them. Twenty-two days of expedition have earned them their independence from us managing their morning, and has earned us a forty-five minute delayed start to our work day.

In between the alarm and the canoe, we break the unspoken rule. Our intimacy moves from light-hearted, indescribable, supportive, justifiable, insignificant. To one moment, illuminated in blue and sharp white, where I turn my body in toward yours and create contact. Electrical current passes through us and a shockwave follows, which we both feel in our bones.

It happens only once.