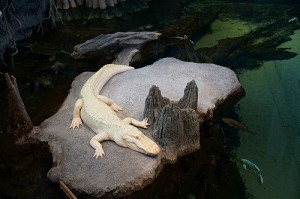 The albino crocodile has no concept of her own captivity. Pressed against her habitat by the crowd, I watch the great lizard balance on crooked arms plump as the sausage-limbs of babies who have not yet learned to crawl. In slow motion, her long jaw parts to reveal point-by-point a matched set of miniature mountain ranges, gleaming, perfect. I am caught in the spell of her yawn right up to the springing leap, a lunge close to flight, and the answering wail of the little girl pressing doughy hands and pug nose to the safe side of the glass. Smacking the clear barrier, the beast shakes her head, stunned. The girl’s scream lingers, a devastating sound in these close quarters.

Ernie’s behind me somewhere, lingering by the turtle enclosure, admiring those compact creatures, snapping heads tucked away in the convenient sleeves of their shells.

The crowd is all elbows and Graco buggies shoving in the narrow, humid space. I am jostled once, twice by the same carriage and turn toward its pilot, a woman who once again jams the footrest of her collapsible Playmate into one of my swollen ankles. A baby sleeps in a sling on her chest and I have to place both hands on my own rounded belly before she stops. The toddler in the stroller sucks a disconsolate thumb, falls in and out of a slumped sleep, feet twitching in light-up sneakers.

“Pardon us,” the woman says, wincing as if the words have burned her tongue.

“Wait your turn,” I say, because we have driven forty-five minutes in the Phoenix heat at my request on this rare day off, parked in outer Siberia, and snaked in line for sixty sunburnt minutes, all the time gagging on the animal reek of the World Wildlife Zoo’s underfunded, chain-link campus, to see this albino beauty, oddity of nature, newly caught and caged for public consumption.

Mother Hubbard’s jaw is set now, cheeks reddening high on their tilted planes. I turn back to the crocodile’s glass square, startled by my own pasty image in the glass.

“You’re not even looking at it,” Mother Hubbard says, as if I am one of her wayward brood. In three months I will be a mother myself. Then, if I choose to go to the zoo, I will need all the things that weigh her down: a diaper bag and Bjorn carrier, stroller too, and soon a leash like her toddler’s—a plastic umbilical curled like a pig’s tail.

“Neither’s your kid, lady,” I say. Her rumpled Cardinals t-shirt is familiar. I sleep in one like it. Her brown hair is sweat-glued to her neck. It is 80 degrees inside, 110 out, and I would give anything to duck my head in the croc’s murky pool where her luminescent tail glows a rainbowed pearl.

Ernie is pushing through the crowd now, too late to toss excuses to the air like dull confetti—hormones, stress, some damn thing—his face a shining apology. By the time he gets to us my adversary is staring at the king snake, leaving me alone with the rare amphibian behind her glass and the baby in my stomach, both of them silent and still and as close to me as they will ever be. Ernie nudges me—a meaty hand at the small of my back. I tap the glass, but the croc only stares straight ahead into the white blur of her own reflection, eyes slitted, flat and blank; nothing, I tell myself, nothing at all like mine.

Katie Cortese teaches in the creative writing program at Texas Tech University and serves as the fiction editor for Iron Horse Literary Review.