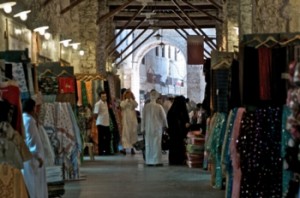 Photo by Larry Johnson via Fotopedia

When they entered they were not sure it was the right alley. They looked up to see scraps of sky between old dark beams like the ribs of a boat. Maybe it was covered once.

They walked a few hesitant meters, past cheap textiles and rugs wrapped in plastic, past women in those same red colors, smiling to themselves in conversation. The walls were tall and gray and the alley looked like a long room.

“Do you think people just sleep out here in the alley?” He shrugged, and wondered if it always looked like twilight here.

Then they saw the tarbouche-maker further on the right. His shop was half inside and half out, like everything else here. He was returning from getting lunch, with a small plastic bag of tam’iyya. The glass store front was filled with shelves of the hats, and a placard that said “In the Name of God, the Merciful, the Compassionate.” He smiled a small smile at them. A litter of reeds from somewhere in the Delta, a stack of woven frames, and a chair stood in front of the glass windows. The machine itself looked like an enormous oven, a blackened brass winking dim in the steady light.

Above, the chuckling of doves, like a quiet liquid on their ears. A cat crouched on a step, in front of a door that may not have opened for centuries. A subtle black soot painted the edges and corners of everything.

They said hello as well as they could with a few words of Arabic, their hands working to explain what they wanted. A gift for his brother. The tarbouche maker was proud and patient, and did not smile but seemed friendly in his patience and his soft voice, surrounded by his life’s work in the ancient alley, the wine-colored felt, the reeds, the heavy machine. T hey motioned to take pictures, and he assented. She in the hat, he in the hat, each with him. He lit the machine’s gas fire, showed them the heavy brass forms, how he shaped the felt. They took more pictures. Finally they bought a hat. He put the hat in a box, took their money, shook their hands, and sat down to eat his lunch. They smiled and turned back toward the alley.

Athaan began like siren from everywhere. A man in a worn blue galabiya walked over to a microphone hanging from a cord that slid down from the top of the wall like a vine. He looked at them for a second with a smile whose meaning they could not tell, then turned to face the wall and began calling into the microphone, adding his voice to the din. A few men knelt on the rugs in the alley and touched their heads to the blood-red wool. Mecca was there, somewhere behind the wall, across the Red Sea.

The cat was still on the step. Someone had put some bread on wax paper for it. It turned at some sound that punctured the low rolling calls from the minarets, and they saw a flap of skin like meat hanging from the side of its face. It seemed not to notice, and bit and bit at the bread until it was gone.

They squinted at the cat for a second and headed down the alley with their gift, to where there was afternoon, and the domes were like sculpted dust, sandy against the cloudless sky.

Michael A. Telafici has been an English lecturer at Texas A & M University at Qatar for the past several years.