The History of Us 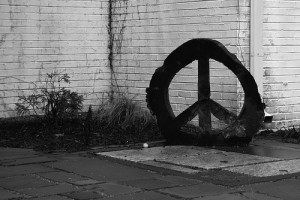 The house was red tiles, flaked stucco, a palm tree to the side dropping fronds like huge dried fish. They flew a pirate flag there, and mowed their lawn into a peace sign until the University mandated uniformity. Stanford had standards.

The dark wooden doors pulled open heavily, and she was small. Perhaps she should not have been there. Inside, there was dirt of all kinds, but the wood-paneled walls held their dignity. The Grateful Dead hummed from unattended speakers. The free box colonized the floor.

There were afternoons in his bedroom, on the futon on the floor. The sunlight in the open window fell on them orange-gold, lending meaning to the abstract poster on the wall. He began, always, touching her back. He did not often get very far.

Out in the alley, someone slammed their van. They lived there: it showed on Google maps. Did everything show on Google maps? His window, open. Afterwards, the boy and she were awkward in the bathroom. There was one bathroom for everyone, everything still blushing. She in the toilet stall, he spread but hesitant by the urinal.

The floor was dirty and the hallways bent and always disheveled people came from nowhere. They walked like they owned the place. On the concrete balustrades outside the door they drank coffee from salsa jars. Mrs. Renfro’s salsa, she would come to know. They nodded, sometimes, when she passed them, impassive as she pushed the great door.

What, they asked, is a condiment? Mustard, certainly, but jelly? Peanut butter? The discussion ran heated and long.

She would live here. She would be that lucky.

She brought her bags three days before school in the fall. They bumped her hip as she pushed open the door.  Inside people told her, sleep anywhere you like, so she slept in the room that was no longer his, curled on a couch. The couch, the room, the light, the light on the couch, the smell of the couch – dusty and sweet – the windows with their same view, his torn poster still on the wall though he was continents away and did not write to her. It was as it should be, a safe interval of nights.

Com’ere, said someone. The room was dark wood and the window blazed blue and foreign. Have you read The Electric Acid Kool-Aid Test?  It’s the history of us.

The book was passed into her hands like a purpose. The colors of the cover faded white with wear. The history of us being who?

The house was happy chaos. People moving in, people moving out, visitors eating avocados in the kitchen. They favored sandwiches: tofu, avocado and greens, as high as they were thick.

Hobart! Someone yelled and they wiped their hands and all unloaded the dish sanitizer.

On the walls, the Beatles in yellow and red. On the walls, whole rooms of lime green, neon yellow, tropical fish. Jim Morrison in black light paint watched them in their beds.

The garden—all bitter arugula, wild mint, upstart trees of composted avocados—admitted her, barefoot, to its soil. She washed her feet in the bathroom sink each night before bed.

The showers– gym style, co-ed – had only Nature’s Gate shampoo. Everyone’s hair smelled the same. She showered with most others, at one time or another. And always the hairball, hamster-sized and pulled from the drain to the corner. She felt it knew of her. Discarded, another grew.

The girls were beautiful, and always sewing. Their yoga bellies lay toned below their tied-on, hand-sewn shirts. Sometimes she could see their nipples. They ate, she thought, mostly avocados.

The boys drank beer at ten AM on Saturdays.

When the hot sauce ran low, the boys switched it for a full one at the campus taco joint.  There were many such dubious cost-saving measures. Also, there were boxes of avocados. Live bands. There were always people sleeping on the roof. In closets. On couches. In other people’s beds. Sometimes, they cooked dinner without clothes on because things like that could be done.

School started. Things settled in. At a party, they filled the shower with people. She spluttered in the back and was invisible in the photographs. Afterwards, she joined a mad rush to the backyard hot tub. Filched from a construction dumpster, it got filled with a hot-water hose. She came up at the end and lay, a beached whale, across knees. People splashed her solicitously.

Sorry, said D-Jax, but your crotch is all over my knee.

Somewhere there was something happening, and the trick was to get there. She always accepted a spontaneous adventure. Stealing avocados, sneaking into buildings, sleeping out in the hills. Yes, yes. San Francisco, Santa Cruz, the airport at eleven PM. Yes, she said, and got into the car.

She neglected Tom Wolfe for Chaucer and Blake. She gave up sleeping indoors. On Fridays, at 10:45 AM, she cried and had to miss class. She cried for no particular reason. Everything hummed.

Elliott Smith on vinyl in the yellow midnight lamp. In every room almost there was a futon on the floor. Others, as melancholy as herself. The house itself, it knew her and her long nostalgias. The boy with the western window came by sometimes, being back in the country. They did not know what to say.

What is the point of this? The point of everything? She knew there was a point.

There were mornings she woke, knowing what she needed to do. There were long aching afternoons, where there was not even the clear sense of breathing. Youth was meant to change things. Youth was a weight: it must be flung wisely. But she was always so full of that oceanic blue.

On the bed, in the room full of houseplants, people curled like a mass of puppies. Slowly, they stroked each other’s arms, shoulders, legs. Their clothes were worn and sloppy. She entered the mass. She went in willingly. Still she was lonely. She had not, like them, breathed the nitrous. Their minds were foreign to her. She suspended herself into them, as if to understand.

Why us? she thought. It’s a big hypocrisy. Still, there was something below it all. Something more than nakedness and avocados, drinking out of jars. She cared mostly about light, about humming. What was it she had to do?

She hefted pots of rice onto the balustrade. Out past the lawn, students walked, drove, ran. Come, she wanted to call to them. I will feed you all.

Those days she slept never with others, but often beneath stars.

Becca Rose Hall studied writing at Stanford University and the University of Montana. She recently finished a novel which explores her generation’s inheritance of counter culture.  She blogs at thefriendlymoth.wordpress.com and edits the journal Pocket Guide.