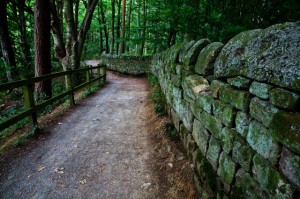 Now that I am older, I play my part as though it mattered a little more. It doesn’t work of course. It never worked, though I have dreamed myself into all kinds of places, for example out west in a harmless looking farmhouse, grey lichen, black ivy, overgrown garden, and still up that path they came like your worst nightmare, the worst fear of a child alone in a strange hallway with a November draught, the ticking of a grandfather clock. There is someone at the door. And beyond that sinister presence the world reverberated with distant train whistles, trains leading to the nucleus of a city, too far away to offer security.

I heard the voice of one I am haunted by, fifth anniversary of passing. Where are you, I said? Snippets of conversation that happened in his day came from out of the shadows.

Can you describe where you are now, I asked? No, he said, it’s forbidden. Then he told me of a day, not long before the end, when he took a drive into the country and walked in a forest and saw deer paddling through a flooded pond, the water exaggerating the thinness of their legs. The eyes that looked at him struck terror into his soul. He swore he recognised the eyes of a neighbour, a woman who had passed away. He took it as a sign. This same woman had frightened him once by telling him that she could see God’s angels descending to collect the souls of the dead.

I blew dust from the cover of a book. A musty cloud of barely visible yellowness rose up, may have settled on the screen or window pane. The sun, the mountain, the ocean, the hand of God or of a saint, the brightness of the day blinked in through the window, the rays of the sun blinked away by the stroke of a bell, the tick of a clock. I sneezed. I turned yellow, had been turning yellow for some days as I had hardly moved, only to go to the stove, then the outhouse. In the intervals between bright sunlight I listened to the rain. Then to the random sounds of the city beyond. By 7.30 a.m. it was alive in all the fury of routine. The dangerous night stalkers, lone shadows on corners, had vanished into their cellars or attics, leaving the way for the seething masses, feet on the accelerators. I wished I could somehow transform myself into such a shape as would fit into my mouth, and climb in there and disappear like an aesthete in his cellar, turning yellow.

Five days, six moons, stove, outhouse, I got restless of course. Down the stairs, feeling like I was running from some kind of Limbo. Down the stairs trying to take a certain head along with me, the one I wore in my room, the one who fathomed some unfathomable strangeness, down the stairs, can I bring it with me, no, not at all, by the time I was on the ground floor heading into the street, everything was unfathomable again. Obstructions to understanding anything creaked in every step of the timber stairs. Every cracked paving stone on the footpath of our old street held the world of ghosts, whose words not only distracted but added to the chaos. The living in all the urgency of vitality seduced me. Those rosy lips, those pear shaped tits. Shop windows seduced me. The sudden turn onto a bridge. The crossing of the bridge. A parade, a laneway, the Mall. A pub. A sandwich hall. The art Gallery. The convincing light from sloping streets that ascended. The conviction in the face of the passing man.

I got as far as a quay wall, automatic movements, no map needed, no decisions to be made, the quay wall and the turgid waters of the tidal river and there they were, the seagulls, to put me in mind of some demented painter who committed suicide. I wish I could do it, I said to myself, I mean paint. The seagulls would appear like a line of white patches with grey strokes for head. The houses were over a hundred years old, with bay windows and attic glass slanted in the roof under redundant red chimney stacks. Up river there was the cathedral, the weir, the bridges.

In turns I was doleful and gloomy, then mad and cheerful, singing and dancing, then doleful and gloomy again in the cellar, Irish, I was Irish, all that about being an orphan in a strange land, in love with death, diabolical nonsense, I was Irish, danced and sang, what a singer I was, drank and spoke in very long sentences at the bar counter, walked home in a fuzz, then again, with the yellow glass, whatever light it was, the street light, the moon light, the vapour from a stew boiling on the stove, the bulb above the outhouse door, and I hummed, then again, doleful and gloomy, happy and mad, Irish, I was Irish. For a time the darkness was resisted, at least dulled to piss yellow, the lantern of the years, memories, singing in kitchens, celebrating an extra pound of butter and a loaf of bread off the ration card with a sing song that resisted, inward after that, I went inward, a fourth floor cellar, up and down, how seriously did I take myself? I took myself much too seriously. My metabolism was serious about staying around. I knew where I was headed, but like a mad Irishman, drowning in black porter as fast as you fill, I resisted it with all my resources. No barnacle had suction like mine.

I dreaded returning to the room for fear of Limbo. But up the stairs I climbed. I sat in the room next to the table waiting. Only the sounds of the living came at the beginning. I heard a neighbour snoring; loud thundering wagon wheels, pause, then a train whistle racing by, pause, then again, the clattering of the wheels over cobblestones. The bare light bulb shook, the walls moved. A door opened. A light snuck in, a very potent brightness, the colour of death, I thought, here we go again. The door opened and let death in. Elsewhere neighbours went on a rampage. Tempers flared but even roaring voices did not silence Long Tom’s snores. I laughed. Such a madhouse. Two brothers were fighting. I heard the thumps. Vulgar voices. I wanted to get married once, I admit it. I would have a daughter and a son and they would talk to me and I would meet people in the supermarket and they would say; How are yours, how many again, and are they still in college, or did you get them out to work yet? It might have happened. It might even have been unavoidable, given another few twists of fortune, or even the one twist, say an unexpected encounter, a fortuitous meeting, some enchanted evening. I dreamed of having a daughter and watching her grow, life expectancy advancing with medical advances. I heard her name. My head fell forward and hit the table. I heard girls way down in the street laughing, then it seemed as if they were on the landing right outside the door.