In And Through The Cold 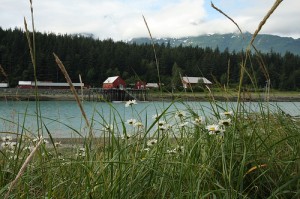 Pretend to be natives. The idea was absurd, a stroke of genius. Perfect timing, too. It was 1925, the year after the US granted citizenship to American Indians. We were sure the Alaska Natives would soon get the same recognition.

The veteran Alaskeros laughed. Inside the damp and crowded locker room, they sounded like hysterical seal pups. These Alaskeros have settled into the life of being migrant Filipino workers. In the summer they canned salmon in Alaska. The rest of the year they hustled or worked on farms in Washington and Oregon. But we, the nineteen youngest whom they called schoolboys, weren’t satisfied. We couldn’t enter university, keep up with our studies if we were constantly on the move, following the work seasons, picking vegetables and fruits in farms along the Northwest. We worried about going home to the Philippines empty-handed, failed experiments in America’s policy of educating its little brown brothers.

You’ll never pull it off, an Alaskero said.

We asked one of the three Tlingits over. The Alaska Native grinned, posed, and played his part. Do we not look like him? Look at his eyes. Small, Intsik and dark. Look at his hair. Black like ours. And he’s small, like us. Tlingit. Haida. Filipino. Who can tell the difference? The Tlingit had his own language, a different alphabet, a different lilt, an icy, angled inflection to our tropical drone. But English words broke the cadence of both our tongues. Conveyor belt. Factory assembly line. Commercial fishing and processing.

Yes. And your lips are as thick and flap as much. But your nose is flat, the older Alaskeros cackled.

How about that time three Filipinos were asked to stand-in for three Eskimos. When? Who asked? They. In 1910. At the Alaska-Yukon-Pacific Expo in Seattle. No, 1909. That’s just rumor. It’s true. Someone I know has a friend who knows the son of one of the three. Didn’t you tell us about someone you know who was there on display as an Igorot, and this person said that they took some of them from the Philippine presentation for the Eskimo show?

You can’t disguise yourself here or anywhere else you’ve been. They already know you. Where will you go? We heard there’s a new plant in Kuiu Island. And our Tlingit friends confirmed it. The new plant needs workers year-round. Salmon cannery in the summer. Herring, cod and halibut the rest of the year. More news from the grapevine, huh? Someone we know knows… A friend who knows a son of the father of—just tall tales and chitchats! Another round of laughter from our seniors. We started to correct them, tell them it was precisely through this grapevine, this wide network of migrant workers, this informal web of communication that they found out about and got their cannery jobs. But we kept our mouths shut, let them have the last word. We didn’t want to seem arrogant and disrespectful.

Only six days into the season, and already we were anxious about the end of our three- month contract, wondering where we would go next. We donned our green slickers and stuffed a pair of black gloves inside the deep pockets. We entered the processing room. On the ninth hour of sunlight on that longest day in Anchorage when the sun didn’t set, but only dipped below the horizon, its glow keeping the sky illuminated, we the schoolboys resolved to go forward with the scheme. We planned, yelled over the pounding machinery, quelled the usual prickly pain from frigid water and scalding steam, went about the dizzying routine of butchering, eviscerating, washing raw fish without the usual sense of repressive drudgery. By the sixteenth hour of sunlight the floor was covered with slime and goo, we’d absorbed another layer of the sour, putrid stench of our industry, and we’d mapped out our road after this contractual cannery work.

The new fish processing plant at Kuiu Island was at Saginaw Bay. An auspicious name. In our Philippine language, sa could be the preposition in or the adverb meaning through. Ginaw means the cold. Sa ginaw—in and through the cold. Even the twelve veteran Alaskeros who came with us thought that the word was not mere coincidence, that maybe this place edged with limestone cliffs would lead us closer to what we crossed the Pacific Ocean for.

The Tlingit clans in the island were skeptical, but civil. They had been notified of our arrival weeks before. We had been concerned about taking their jobs at the plant, but we were presumptuous. The Tlingits in Kuiu Island didn’t care for fish processing and canneries. Now the members of the Tlingit council, stern and godlike, stood motionless in a semi-circle bounded by tall wooden totems. We turned, deferred to our three Tlingit friends who joined us from the Anchorage cannery. They spoke to the chiefs on our behalf. We were expected to do our share of communal labor. In exchange for English lessons, the village would host us indefinitely. A chief pointed to a large, bark-roofed rectangular cedar-plank structure. Our new home. Another chief said, the council will handle the Bureau of Indian Affairs when they come tomorrow.

Dorotea was born in the Philippines and grew up in New York City.