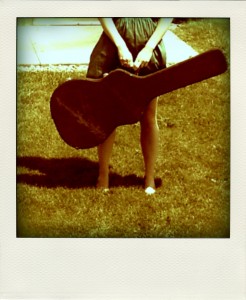 My father had this girlfriend. Her name was Gemma Fay. She looked like Mia Farrow. I think. I only saw her once and she was naked then.

Gemma Fay was my father’s first girlfriend and, therefore, the anti-hero of every cautionary tale he ever told. For years, she represented the myriad horrors that awaited me in the dating world, a l and of seemingly endless poverty and worry and woe.

My father would say:

Don’t spend all your money calling boys long-distance! I did that and Gemma Fay broke my heart…

Don’t worry about the future! I worried and Gemma Fay broke my heart…

For the love of God, don’t read Plath! Gemma Fay did and she broke my heart…

Gemma Fay had been the cause of huge phone bills. She read Sylvia Plath. She broke my father’s heart. Like, tore it to pieces and stomped on it.

Gemma Fay dumped my dad in 1972. It’s been forty years and she has haunted our family all that time.

Gemma Fay was born two days before my mother. My father always transposed the dates. He did this to such an extent that I struggle to recall my own mother’s birthday and, all too frequently, I have wished her well on what was, in fact, the day my father’s ex-girlfriend was born.

(My mother does not discuss Gemma Fay. Her silence is tinged with that unspoken, ferocious loathing women have for the other women who have loved their men.)

My mother and Gemma Fay intersected in my father’s life for the briefest of moments in 1973. He and my mother had just started dating. Gemma Fay was in town and needed to borrow twenty bucks.

Gemma Fay called my father. They met. He gave her the money. He never saw her again.

The aforementioned photograph is tucked away in my parents’ house, on a bookshelf in the library. I saw it when, in a conspiratorial moment, my father showed it to me one boring Tuesday afternoon. But there’s another picture of Gemma Fay. My father didn’t show me this one, but I happened upon it one day.

It hangs in his closet, on the wall, as though it were art.

In it, Gemma Fay still looks like Mia Farrow. She is wearing a faux-Victorian dress, with a high neck and frills around the collar. The sun glints over her shoulder and reflects off her platinum hair. She has the gently puckered expression of someone who is about to blow on a dandelion.

I know why my father kept this picture. I know why it hangs in his closet still. Because there are people who remind us of how we once loved, of who we once were, of the lives we had thought we might lead.

In this photograph, Gemma Fay isn’t a heart-breaker. She’s just a girl. A girl who would ask to borrow twenty bucks and you would give it to her. You would let her break your heart.

Oline Eaton has written extensively on celebrities, gossip and adventure. She is a freelance writer and editor at work on her own biography of Jacqueline Kennedy. Follow her at findingjackie.com.